The bitter-cold, first week of January was tempered by the warm, service-oriented hearts of 17 students from Badger Catholic, a group of students from the University of Wisconsin and Edgewood College in Madison, who joined Sister Connie Bach’s PHJC Volunteers in making an impact at several PHJC ministries. Accompanying them was Father Tim Mergan, who served alongside the students and celebrated Mass during the visit for the students, Sisters, and residents.

In their third service trip with The Poor Handmaids Volunteer Program, Badger Catholic students served at Sojourner Truth House in Gary, visited Albertine Home in Hammond, worked at the campus greenhouses, and packaged and delivered food and basic needs to two hotels that house the vulnerable in Plymouth, Indiana.

For many of the students, it was their first hands-on volunteer experience since the pandemic began nearly two years ago. Edgewood College senior nursing student Grace Brennan was delighted to serve in-person again. “I love being able to help out, especially amid COVID, but there were limited opportunities. Last semester, I couldn’t get eight hours of hands-on service in; nothing was open to in-person service.” While in Hammond, the students visited the Albertine Home to play bingo with the residents, something Grace, pictured above, appreciated since she’s worked in senior care while earning her nursing degree.

Badger Catholic Focus Minister Erica Nossaman relished spending a week serving others, and for the new experiences, so rare during the pandemic. “Any small thing you do, you can do for Christ. I’m super thankful for this opportunity,” she said as she and Grace transplanted lettuce heads in the greenhouses.

Many students expressed gratitude for the community they built both with one another and with the Poor Handmaid Sisters. Junior Lydia Heinen noted that UW Madison is such a big campus and has a large Catholic community, so she was meeting some of her fellow volunteers for the first time. “It’s amazing how close we’ve grown in this opportunity to serve and encounter Christ in others,” she said.

Hunter Wallace, co-leader of Badger Catholic, also a junior, found the Sisters “super welcoming and mindful of the students’ needs, too. It’s a service-oriented group that’s been so cool to be a part of,” he noted while he and Father Tim hauled and stacked wood to be burned and made into biochar, an organic soil supplement used in the greenhouses.

The students created instant community with a man they delivered food and hygiene supplies to at Plymouth’s Red Rock Inn as they serenaded him with Happy Birthday. Freshman Dina Cianca noted of the experience: “The Poor Handmaids’ hospitality, simplicity in service, the sense of community, and love will keep us serving God for a long while.”

With consistency and bereft of fanfare, the PHJC Volunteer program has made a community impact for Plymouth’s most vulnerable residents. Plymouth’s two transient hotels and a trailer park behind the Duke of Oil attest to the unstable housing in the area. These stats for the first half of 2021 also indicate food insecurity:

Additionally, she provides clients with diapers, baby wipes, home linens, and personal care products, which everyone needs but cannot be purchased with SNAP benefits. Currently, the program is in need of donations. Groceries are increasingly more expensive, and it takes money to feed those most vulnerable. VTO hours can also be used to both pack items and for the twice-weekly deliveries.

There’s also a story that stats don’t tell. Sister Connie has built a coalition of stakeholders in Marshall County who are dedicated to eliminating hunger. They include the Community Foundation, the United Way and the Food Council, all of Marshall County, Cultivate Food Rescue of South Bend, and the Saint Joseph Regional Medical Center tobacco cessation program.

The PHJC Sisters have a long history of service to the migrant communities where they serve, both in the U.S. and abroad. In the 1980s, Sister Edith Schneider taught and assisted migrant children of workers picking tomatoes and peppers in Marshall County. She went on to serve in both Nicaragua and Mexico. Sister Connie Bach has taken myriad trips to the border and into Mexico to serve those awaiting entry into the U.S. and those newly arrived. It’s a volunteer full circle with Ernesto serving twice a week on the delivery trips into Plymouth.

Return to the Border 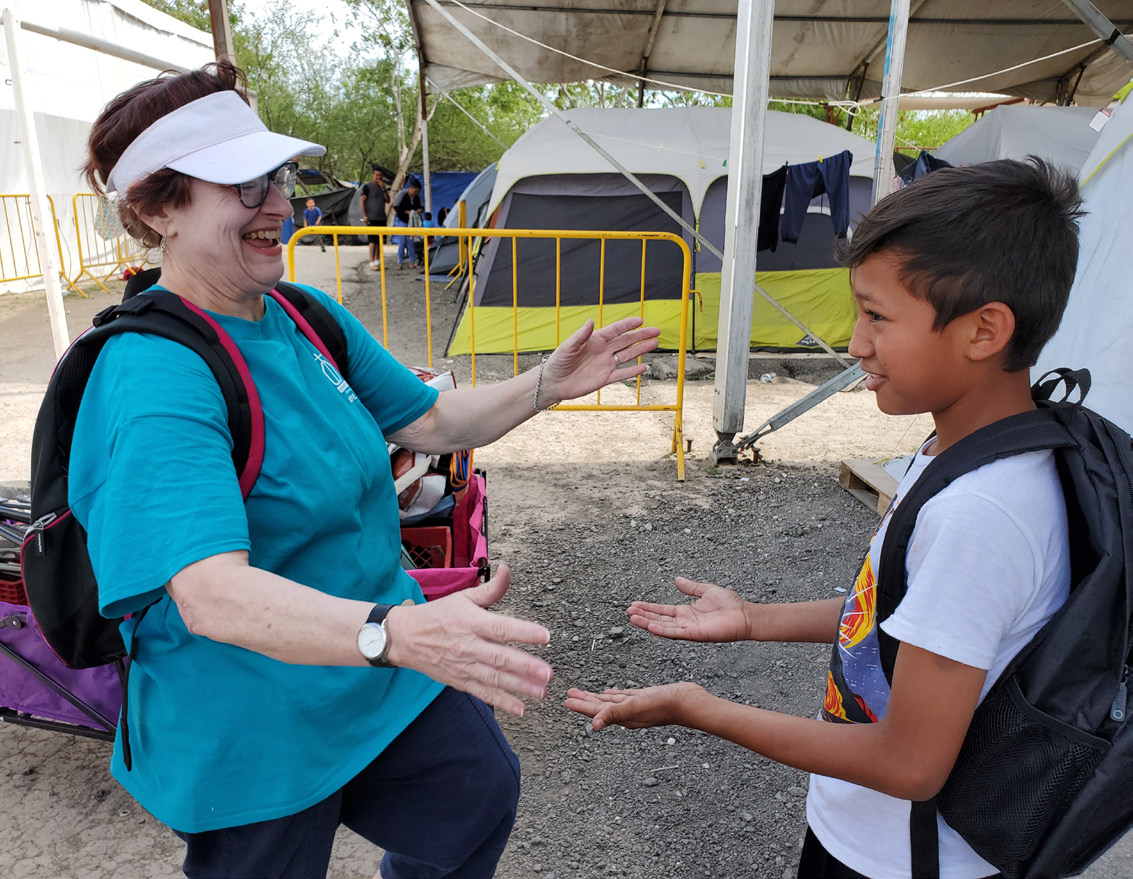 Entering the tent city of Matamoros for the second time on our PHJC Volunteer trip in March engaged my senses. Much had changed since our initial trip in December, 2019. I felt the heat and wind first. The wind never ceased blowing during the week we served. Everything was so much greener than back home. Then the smells hit. First, the smell of campfires everywhere, both for heating and cooking. Next came the latrine smells, so vile that it would be an olfactory assault on the most seasoned camper or summer concert goer. The visuals were somewhat more complicated.

It would be easy to dismiss the tent city as crowded and chaotic. It’s what most see on their initial glance. Look deeper, and you’ll find truth, beauty, and community, which are always there for those who seek them. Families looking for a better life and opportunity for themselves and their children comprised the people we met. The Sisters and co-workers serving on this trip included Sisters Connie Bach, Rosemary Jung, and Barbara Kuper. Poor Handmaid co-workers were me, Marcy Heil, Warren Johnson, and Steve Weinert. What we saw and were able to do once again changed our lives.

One of the first things Sister Connie and I noticed, different from December, was the change in products we packed at the Humanitarian Respite Center of McAllen, our home-base for the week. Instead of making endless peanut-butter and jelly sandwiches to wrap and transport, we packed 350 pounds of masa flour, 300 pounds of beans, 125 pounds of salt, 125 pounds of sugar, 23 gallons of rice, 6 gallons of canola oil, (repackaged in smaller bottles) 60 pairs of shoelaces, 60 Chap sticks™, and 60 rosaries for delivery to the tent city residents. We repeated packing this list daily. Sisters Rosemary and Barb cleaned everything in the kitchen, making it shine like new. Steve also put batteries in the clocks at the respite center, since each one reflected a different time. Time is relative when you’re playing a waiting game.

The trek into the tent city was much longer this time, too. Two big dumpsters filled the area where we had previously set up our offerings, so we walked about a ¾ of a mile longer with ten heavy wagons each day. During these walks, young men and boys from the tent city would come up and pull the loads for volunteers, walking in Saint Katharina’s shoes beside us. They also carried the empty wagons down a staircase for us on the trek out.

There were cell phone charging stations, a place to do laundry (by hand) and wash dishes, and mercifully, the presence of other volunteer groups like Doctors Without Borders and UNICEF to help ease what must be a harsh life. Children created art and attended lessons in the UNICEF tent while their parents and caregivers carried on with daily life. New on this visit was a group of barbers offering haircuts to those awaiting entry into the U.S. with them.

The community we bore witness to was truly an inspiration. Marcy enjoyed games of “hot hands” and thumb wrestling with kids waiting in line, who despite the language barrier, understood the games’ objectives and laughed even in defeat. (She’s good!) On our last day, several of us broke out in the song “Show Me the Way to Go Home,” also while serving the tent city residents. A gentleman joined in, singing the verses and chorus in English. Laughter ensued before he got somber and told us how much he loved America and Americans. Steve warmed all of our hearts when he bought watercolor paper and paints to share with Mia, age 4, a guest at the respite center from Congo. For a few brief hours, Mia got to learn from a world-class artist, splash paint at Steve and laugh, and return to her childhood.

On this trip too were the constant warnings on how to prevent the spread of the coronavirus, which presented a challenge to us and to those who we served. How do you practice social distancing in a tent city? In a respite center? Among your fellow volunteers while you’re working to care for thousands already challenged? It was a quandary we did our best to overcome.

Sister Connie planned a return trip to the border in June, but it’s now postponed. Participants from the March trip will present a lunch and learn about our experience, also at a future date.