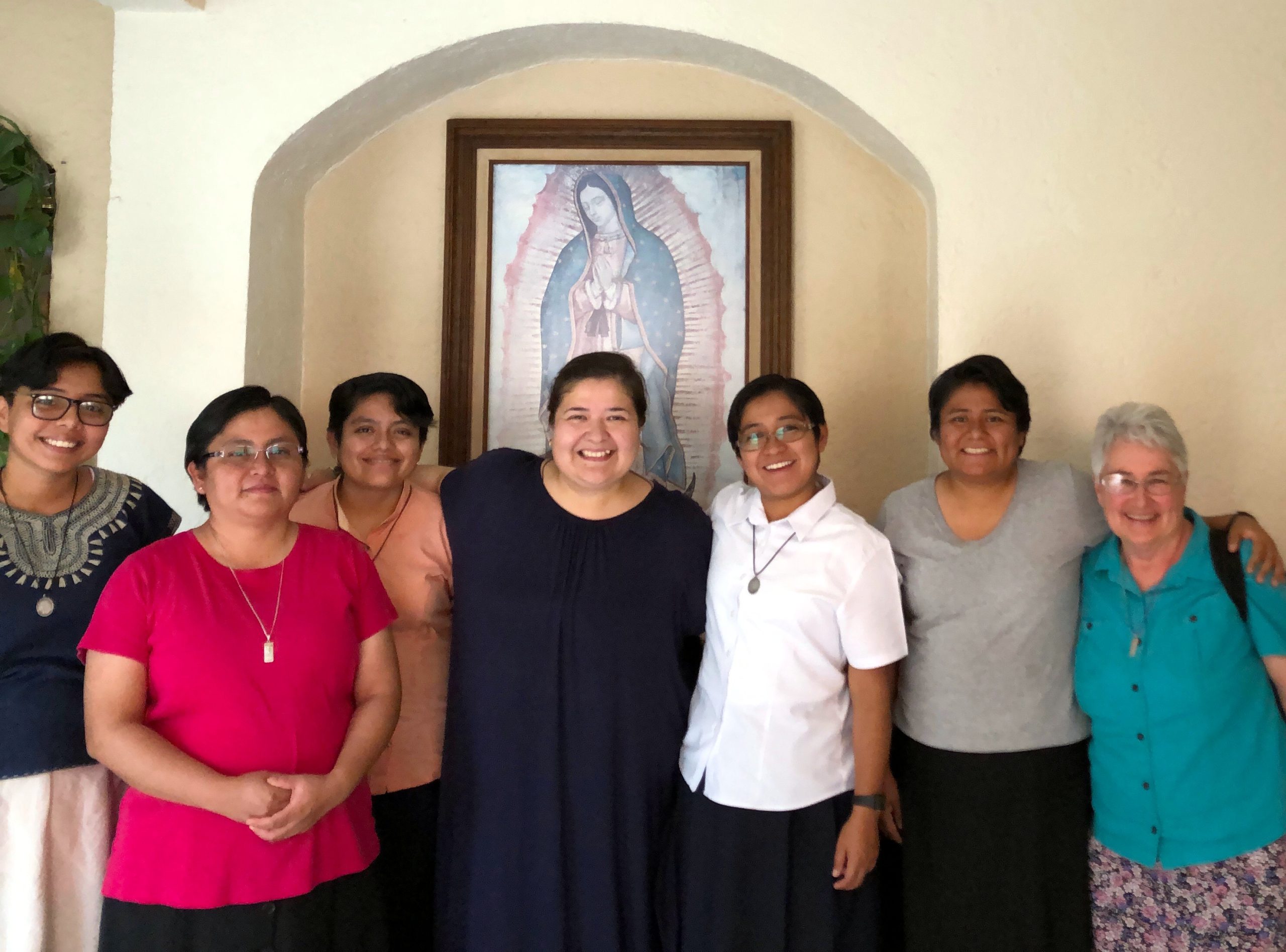 The opportunity to volunteer with the Poor Handmaids of Jesus Christ was a wonderful experience and I would recommend it to anyone. When I started looking into joining a volunteer program I wanted to go somewhere I could help and feel useful. My main goal was to get a sense of fulfillment after quitting my job of ten years. Although that did end up happening and I am heading home with an overflowing heart…I received much more than I could have hoped for. A friend of mine mentioned that I might end up getting more that what I give, and now, I think that is true.

Living in intentional community connected me with others in a special way and I know I’m leaving Querétaro with life long friends. The bond developed over daily prayers and meals is a strong one. Initially I was worried about not doing enough, but thanks to the volunteer coordinator, Sr. Connie, and my spiritual director, Sr. Marybeth, I was able to focus more on the small works/gifts and on the ripple effect of my time here.

When I say I got more than I could’ve hoped for, it is in the sense that I was able to focus on me and my spirituality in a way I don’t think I would have been able to back home. In looking to help others, God was looking to help me…and gifted me with the present of time for myself and spiritual growth. Yes, there is always something to be done, but the sisters have a different rhythm in life…one that allows for prayer, reflection, and self care. I plan to keep keep those values with me going forward.

Due to unforeseen circumstances I stayed a month in the formation house and was able to get into a comfortable routine of prayer and teaching along with early risings. Being open and flexible are key when going into something new, and although I had no idea what to expect, my month at the capital was wonderful. I was able to teach English to the novice Ilsy and aspirant Yessica. On Wednesdays I would join either one of them at their respective ministry site. Ilsy’s ministry site was Niños y Niñas, a center dedicated to tutoring kids and helping them with homework. Mostly it’s kids that need the one on one attention, and it was my favorite to work on their reading. Yessica’s ministry was Casa Cuna, and that is a religious community run daycare. I mainly worked with 1.5-2.5 year olds and they were so precious! My favorite was watching them practice the dance they would perform on Independence Day. The morning and evening prayers and daily mass was a big difference from my normal weekly mass and once a day prayer, but it was just what I needed. Developing these habits have been instrumental in my time since the end of my mission. During the morning prayer we would review the gospel of the day, and we would discuss what spoke to us or what we understood. At first it was a bit intimidating to speak up, because I had never really discussed the Bible much…but Sr. Silveria and the girls were so great at explaining and sharing their viewpoints that it soon became a natural part of my learning.

After a month at the formation house I was able to move to San Ildefonso, which is a small town closer to Amealco and about an hour and a half from Santiago de Querétaro. I had the opportunity to meet and work with some of the Otomi indigenous residents of San Ildefonso. Mondays, Wednesdays, and Fridays I taught the kids English, computer skills, and crafts. Tuesdays and Thursdays I taught English and computer skills to the adults. Safe to say the crafts portion was the favorite part of the class for the children. One of the crafts was making a God’s eye, and one student in particular loved making them. I gifted her the remaining material so she could make more. Her grandfather said he could likely sell them for her, so she was excited about that. Most of the students that came by were from very humble homes, but one group of siblings in particular was in need of dire assistance. Their mom was unable to provide food for them, and Sr. Mary was able to secure them a grocery sponsor from the states. Although it was heartbreaking to see so much need, it was good to see that this religious community exists and is truly doing Jesus’s work. It’s not exclusively praying (which is beautifully powerful in itself), but it’s full of action as well. As the days went by our plate seemed to get more and more full, and I loved it. By the end of my time there Sr. Mary and I were going to San Pablo for choir practice on Saturday evenings, Tepozán for guitar lessons (taught by Sr. Mary) on Wednesdays, trying to visit the sick on Tuesdays, Bible study on Saturday morning, and I taught morning and evening classes three days of the week. It seemed there was a never ending task list, and it felt so good to be involved in the town and neighboring villages. The people always greeted us with such warmth and kindness. One day after mass we were invited to a home and we ended up leaving with a bag of tomatoes, peaches, and lemons. Mind you, it was the host’s birthday, and we were the ones leaving with our hands full. There were many other instances such as that one that would just fuel the soul. I was so grateful to share those experiences with Sr. Mary, they were all possible because of the community she cultivated over more than a decade of being in San Ildefonso.

During my time in San Ildefonso I met a young mother of four and we became fast and close friends. She and her family were one of the many blessings from the town. She welcomed me into her home and her family. She was one of my students along with her kids. I fell in love with her children and they gave me the sweetest send off along with the cutest farewell letters when my time there was over. They still go crazy when they see a plane flying by and send me adorable messages via WhatsApp.